A major study is under way to analyse the ageing

of wine beneath the sea. The Basque Country University is making use of aquatic cameras and monthly checks by divers to track the wine’s evolution on the seabed off the Basque Country’s coast. Iñaki Etaio, a researcher at the Basque Country University, says that each underwater bottle has a sister bottle in a warehouse so that the two samples can be compared. The research is being conducted 15 metres down in the Bahía de Plentzia (Plentzia Bay), in the Basque province of Bizkaia at the Underwater Laboratory Aging Drinks (LSEB), launched by the Bilbao-based Bajoelagua Factory (“Bajoelagua” in Spanish means “underwater”). The project has the support of the Ministry of Environment and Rural and Marine Affairs.

The underwater lab holds a series of modules

which act as a submarine wine cellar, with a capacity for 1,600 bottles. A series of sensors, cameras and new devices will control the site of the first Submarine Laboratory (LSEB). The modules are designed as an artificial reef and contain sensors, cameras and an illumination system. The sensors gather data on the temperature of the water and sea currents and LSEB can control the level of light required.

The sensors are connected by cable to a

communications buoy and this transmits all the data to a land-based receptor aerial. Software has been developed which receives information from the laboratory, oenologists and the tasting sessions, from wine makers and from the data-crossing system. The result is an enormous database which brings together everything: the harvest, the bottling, the immersion under water, the extraction from the water, and so on.

So far bottles of wine, txakoli, cider and even some of whisky and rum have been placed under water. The idea is to carry out tasting month by month and to see how the drinks evolve. Trials are also being undertaken with different types of bottles (19 varieties of bottles that are currentl 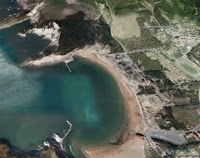 y on the market) to evaluate resistance and conservation ie: the circumstances they have to withstand, how the glass is going to respond, the appearance they are going to have for the customer, if they are going to be marketed, the smells etc.

It has long been known that drinks can age better underwater but there is no scientific theory as to why. According to the Basque Research site one oenologist has experience in sending bottles of Bordeaux to the Alps in order to shorten the maturing p

rocess. But there are no reliable data, and this also has encouraged further study. I can not find any information about this so if anyone has any details please let me know! It also seems that the LSEB is interested in marketing underwater wine as they state that in addition to analysing the evolution of wine in the marine environment, and all necessary elements for its optimal production under the sea water, LSEB will analyse the potential of the international demand of such a product.

If you would like to know more about ageing wine on the sea floor see Sea Bed Wine and Icebergs, Wine From the Sea Bed, Domain Henri Maine, Underwater Yellow Wine and the Jura and Weird and Wonderful Wine Cellars.